I’m back with lots of pictures from Maine.  And this is only day one!  We all left the Boston area and road tripped up to Maine first thing Thursday morning.  But not before stopping by New England’s favorite breakfast place – Dunkin Donuts.

Two short hours later, we were in Kennebunkport in time to drop our bags at Scott’s aunt and uncle’s home and head into town for lunch.

Even on an overcast day, Kennebunkport is still incredibly charming.  I think towns in Maine are actually made for overcast weather.  I even saw an old sailor in a yellow slicker!  (Well I imagined that he was a sailor…it could happen).

We started with lunch at Federal Jack’s – a restaurant and brewery.  The men ordered the full beer sampler, thinking they might get to try seven of the brews.  However, these massive trays of eleven beers arrived. 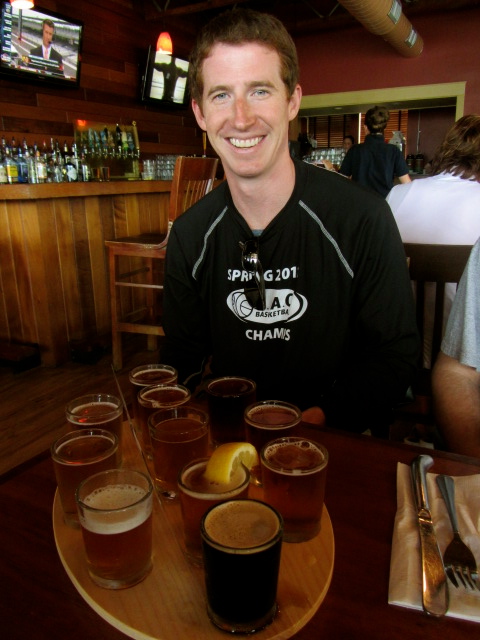 It’s actually kind of pretty, in its own way. 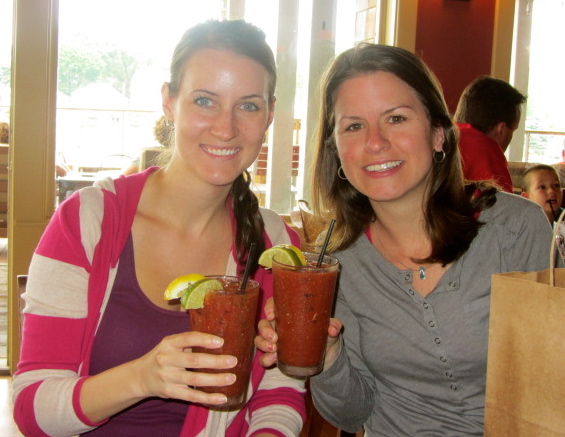 The food was great and just what we needed. But the beers were definitely the stars of the show.  I was able to sneak a few samples in myself. 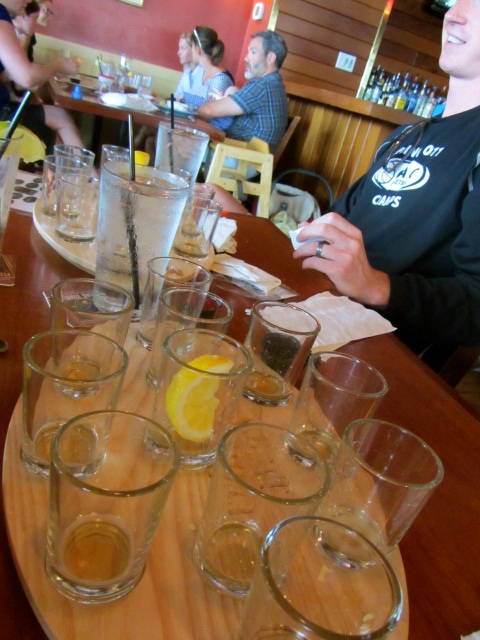 We spent the rest of the afternoon walking around downtown Kennebunkport. Scott got to visit the fudge shop that I have been hearing about for years.  Probably since the first summer we started dating.  In his opinion, they have the best fudge since…well, ever.  So he made a beeline for it.  Luckily, I wasn’t tempted by the candy, as I don’t like fudge.  It’s just too rich for me.  The displays were pretty though! 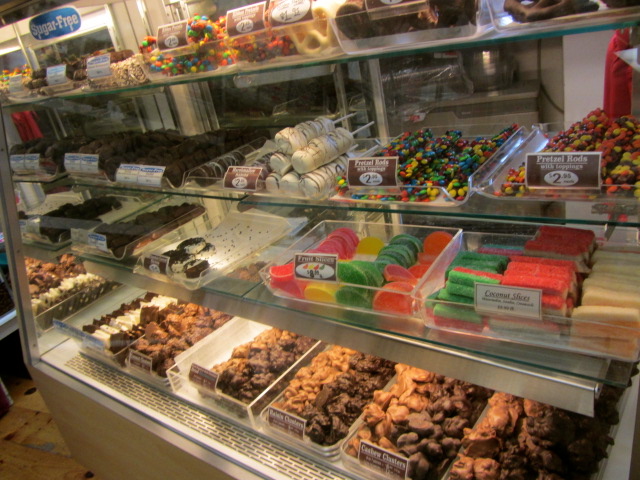 I loved the old time-y feel of everything in town.

This is where we stopped to pick up dinner…ahem…lobsters and mussels.  I was in love.

While the fresh, delicious, still-alive-yet-doomed lobsters were being wrapped up, we explored the little fish house.  And came upon this sweet, little seating vignette.  Almost every shop we visited had a small eating area – from fish houses to gift shops.  Scott’s Aunt Geri said that at the height of tourist season, the town needs all of the restaurant seating it can get. 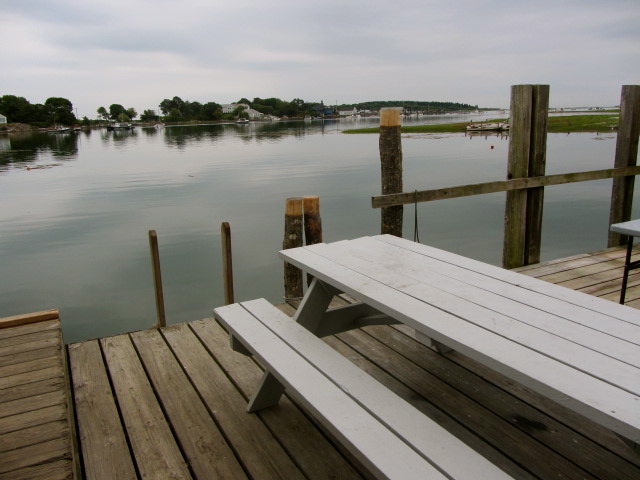 On our way back home, we detoured to see the Bush compound.  I was surprised at how exposed it was to tourists like us.  I always expect the homes of the rich/famous to be well-hidden behind hills, trees, fences, etc.  Maybe ol’ George doesn’t feel the need to hide, considering the number of Secret Service vehicles and gate houses blocking the entrance. 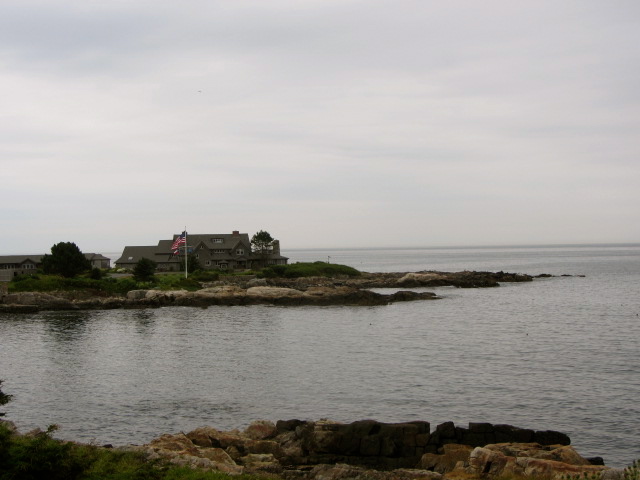 When we got home, we were treated to a sunset boat ride!  Jess and I were the lucky ones and got to sit in the seats at the front of the boat.  We were happy girls with the wind in our faces.

Thank you for the ride, Uncle Paul!  He and Aunt Geri were the definition of generous, gracious hosts.  We had such a wonderful time with them.

Just to prove that I was there…it’s hard to make it into photographs these days.  Jess was really good about offering to help me with that 🙂

And look!  The clouds parted just in time for sunset!  It was perfect timing.

The rest of the evening pretty much looked like this. 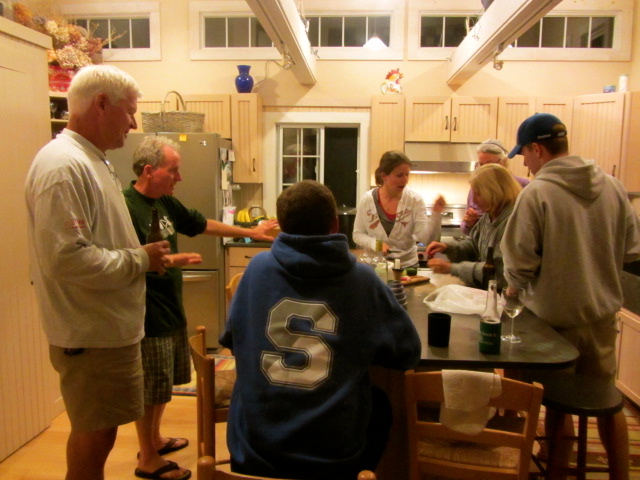 I love my husband.

The food was amazing.  We had fresh vegetables, straight from Geri’s garden.

Delicious, yummy, scrumptious mussels.  And don’t even get me started on the broth Paul and Geri created to steam the mussels.  I had to stop myself from eating it with a spoon.

Scott trying his first mussel.  He joined the seafood team later in life, but is quickly making up for lost time.  (Despite the look on his face, he did enjoy them).

And now.  Ladies and gentlemen, the main(e) event.  The Lobstahs.

I love this picture.  It looks like the lobster is surrendering to his boiling water fate.

Ready to dig in!

And the aftermath…lets just say – they were divine.

I was so very impressed with Paul and Geri’s talent at cooking both the mussels and lobsters perfectly.  You can’t tell this isn’t their first rodeo…or lobster dinner.  What a wonderful first day of vacation!!

Happy Birthday to the absolute best. We three girls love you so much, but Leila is currently on a quest to prove she has the top spot and I can’t even blame her. 😍 You deserve everything bit of it. Thank you for loving us so well.
First day of preschool! Only one of us cried and it wasn’t one of the kids...
My baby sister had the most delicious baby boy! 💙 Our family could not be more overjoyed that Chip has joined the family! We love you to the moon little man.